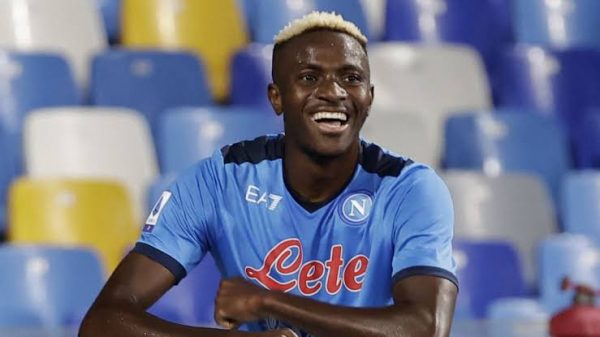 Manchester United are lining up a deal for Super Eagles ans Napoli of Italy’s goalpoacher, Victor Osimhen at the end of the season, according to reports in Italy.
The Nigeria international has been in fine form this season, scoring 12 goals and clocking up three assists from 14 Serie A matches for Napoli
Although, the Red Devils have signed Wout Weghorst on loan, with the striker joining on a temporary basis from Burnley, they are expected to land an upgrade at the end of the campaign as they have admired the 24-year-old for a number of years – particularly if they’re able to secure a spot in next season’s Champions League.
Napoli wants big money to let their prized asset go, however, with a fee in the region of £133 million floated by the media in Italy.
Osimhen, on his part, is said be happy at Napoli – with his current contract due to expire in 2025.
If United do agree to cough up the cash for Osimhen, he’ll become the most-expensive signing in the club’s entire history. Paul Pogba tops the list, with the Red Devils forking out £89m to re-sign the midfielder from Juventus back in 2016.
Osimhen scored a brace and was electric on Friday night as Luciano Spalletti’s side thumped Juventus 5-1 at the Diego Armando Maradona Stadium.