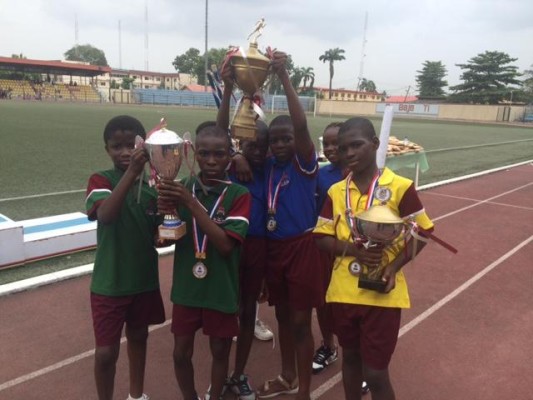 Canaan House has emerged the winner of the 11th biennial inter-house sports of MD Nursery and Primary School in Lagos.
Canaan House, also known as Blue House, achieved the feat winning nine gold, eight silver and 12 bronze medals.
The inter-house sports, which featured the three branches of the school at Omole, Agidingbi and New Oko-Oba, saw Goshen House clinch the second position.
Goshen House, also known as Green House, won nine gold, six silver and six bronze medals.
Gilgal House, which is Yellow House, won seven gold, six silver and six bronze medals to come third, while Bethel House, which is Red House, was fourth with two gold, five silver and three bronze medals.
The major highlights of the inter-house sports were the Cultural Costume Parade and the Cheerleading Dance.
The Cultural Costume Parade featured the dressing culture of different ethnic groups within and outside Nigeria including Maasai tribe of Kenya; the Fulani of Northern Nigeria, the people of Asia; the Yoruba of Southern Nigeria; the Hausa of Northern Nigeria and the Ibibio of South South Nigeria.
The Special Needs arm of the school, located in Omole, also featured prominently at the inter-house sports. [myad]