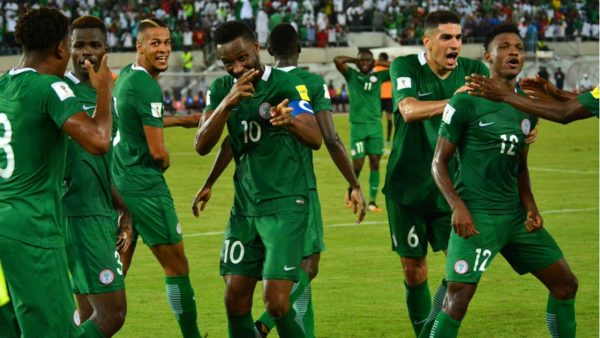 The Nigeria Football Federation (NFF) has offered to pay the players full benefits of the Super Eagles players if they qualify for the knockout stage. This is a way to motivate the players to put behind them their loss to Croatia at the opening match in group D, in the ongoing FIFA World Cup in Russia.

The First Vice-President of the NFF, Seyi Akinwunmi, confirmed that the essence of the full group stage benefit to the team is to ginger the players to give their best in the two remaining matches.

“Once they qualify for the Round of 16, they will get their full benefits as if they didn’t lose any match. This is one of the ways we believe we can motivate the players to go all out in the remaining two matches against Iceland and Argentina,” Akinwunmi who also doubles as Lagos FA chairman said.

Eagles’ players are scheduled to leave their camp base in Essentuki on Thursday morning for Volgograd where they will play Iceland in their second Group D match.

Nigeria lost her opening match 2-0 to Luka Modric inspired Croatia on Saturday in Kaliningrad but have another opportunity to stay alive in the competition if they are able to get a win against Iceland that forced Argentina to a one-all draw.

“Our players are focused on the match with Iceland. They have reviewed the loss to Croatia and done all that is necessary to earn all three points against Iceland on Friday. We are really looking forward to positive result come Friday in Volgograd,” stressed Akinwunmi who also revealed that the NFF was solidly behind Coach Gernot Rohr despite pressure from a section of Nigerians condemning his tactics against Croatia.

He insisted that no query or ultimatum has been issued to the German gaffer as a result of the loss last Saturday.

“It amazes me that people have easily forgotten that this same coach was hailed for qualifying Nigeria for the World Cup with a match to spare. How come he has suddenly become a bad coach?”

On the face-off between some Super Eagles players and a section of Nigerians on the social media, Akinwunmi said that the coaching crew had waded into the matter and steps were being taken to avoid a repetition.

While refusing to be dragged into NFF election campaigns embarked upon by a section of the football stakeholders here in Russia, the NFF first vice-president said the main focus of every patriotic Nigerian now is how Super Eagles will do well at this tournament.

“We are not in Russia for any NFF campaign or election matter. We are here solely to ensure that the Super Eagles make all of us proud. That should be the focus of all of us,” he noted.

Akinwunmi suggested that henceforth it will be necessary for the NFF elections to be moved away from the World Cup year to avoid the kind of distractions associated with it.

“People just want to create problems where they don’t exist. Because we are used to hearing crisis in the NFF whenever it is an election year, they are busy spreading what does not exist in this board. We all (NFF board members) here watched some of the matches together and even had breakfast together this morning. I wonder where such rumours of crisis is coming from,” concludes the NFF chief who was accompanied to the briefing by Chairman of NFF’s Media Committee, Suleiman Yahaya-Kwande, Chairperson of the female league and board member, Aisha Falode and Director of Communications, Ademola Olajire.”