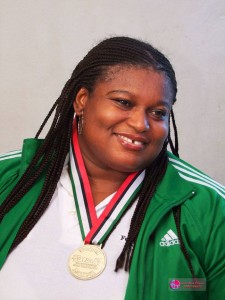 Over two months after an Imo state born Ms. Precious Orji conquered the world as female Powerlifting World Champion, Nigeria government is yet to acknowledge and appreciate her prowess and others who similarly won laurels for the country.
It is on record that President Goodluck Jonathan has since established a tradition of honouring Nigerian athletes that brought international honour to the country, by giving them Presidential hand-shake together with token of appreciation and encouragement. Such honour was usually bestowed on the Champions at the Presidential Villa, Abuja.
Sources close to Ms. Precious have painted the gloomy picture of the world Powerlifting Champion who appears to have been ignored in the Presidential scheme of things, a deviation from the established tradition.

Precious Orji, represented Nigeria at the IPC Powerlifting World Championships in Dubai, on April 11, and set a new world record in the female +86kg weight category.

According to the Head Coach of Nigeria Para-powerlifting Federation, Are Feyinsetan, Orji lifted 151kg to clinch gold in the +86kg category at the championships.

The new record erased the previous world record of 140kg, set by Grace Anozie of Nigeria at the 2013 Asian Open Championships in Kuala Lumpur, Malaysia.

“Orji gave a good account of herself with a brilliant performance in her category. She broke the world record in her first attempt by lifting 145kg.

“She finally won the gold medal by breaking the world record twice with her last lift of 151kg to set a new world record,’’ he said.

Others who made Nigeria proud at the tournament and who are yet to be given Presidential honour are Yakubu Adesokan who won the first gold for Nigeria after breaking his own world record of 178kg in the 46kg weight category; Esther Onyema who won the second gold after she had also set a new world record in the 55kg category; Ijeoma Ihurobiem who won third gold medal in the female 73kg weight category and Anthony Ulonnam who won the bronze in the male 54kg. There was also Abdulazeez Ibrahim who clinched the fourth gold in male 97kg category with a lift of 235kg, while Loveline Obiji won silver with a lift of 142.5kg in the female 86kg weight category.

Nigeria was represented at the championships by eight male and five female athletes. The competition commenced on April 5 and ended on 11. [myad]