Home SPORTS Nigeria To Slug It Out With Liberia, Others In Group C In... 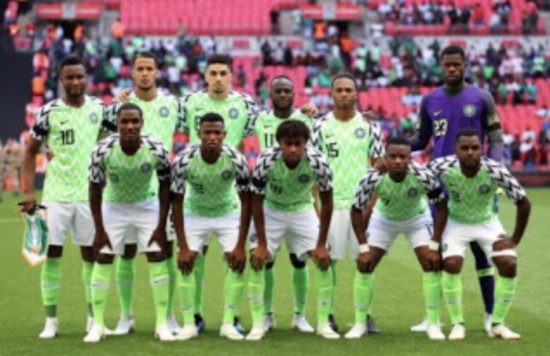 Three-time African champions, Nigeria’s Super Eagles, have been drawn in Group C with Cape Verde Island, Central African Republic and West African neighbours, Liberia, for the Qatar 2022 FIFA World Cup qualifying series.
Representatives of the teams, coaches and African football legends attended the Draw which was conducted by Nigeria’s Samson Adamu and assisted by Ghanian-born and former France international, Marcel Desailly, in Cairo today, January 21.
In Group A, African champions, Algeria, is drawn alongside Burkina Faso, Niger and Djibouti, while Tunisia is being joined by Zambia, Mauritania and Equatorial Guinea in Group B.
Cameroon will battle eternal rivals Cote d’Ivoire, Mozambique and Malawi in Group D, while Mali has Uganda, Kenya and Rwanda to battle with in Group E.
Egypt will lock horns with Gabon, Libya and Angola in Group F, while Ghana will slug it out with South Africa, Zimbabwe and Ethiopia in Group G.
Senegal will do battle with Congo, Namibia and Togo in Group H.
In Group I, Morocco have Guinea, Guinea Bissau and Sudan to contend with, while Group J is made up of Congo DR, Benin, Madagascar and Tanzania.
The Final Round will see the 10 teams drawn into five home and away ties, with the five winners securing the ticket to represent Africa at the tournament scheduled for November 21 to December 18, 2022 in Qatar.
Groups at a glance
GROUP A
Algeria
Burkina Faso
Niger
Djibouti
GROUP B
Tunisia
Zambia
Mauritania
Equatorial Guinea.