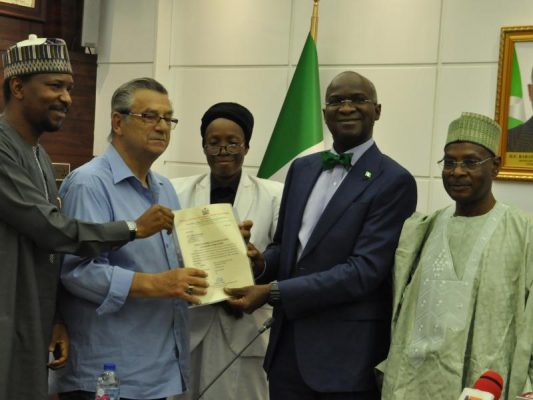 Nigeria’s Federal Government has made a former Super Eagles coach, Dutchman Clemence Westerhof in fulfillment of a promise made to him in 1994 after the Eagles victory in the African Cup of Nations in Tunisia

The promise was made during the late General Sani Abacha administration.

Documents for the property were today, Monday, handed over to Westerhof by the minister of Power, Works and Housing, Babatunde Fashola.

Fashiola, who received the former Eagles coach in audience in his office, said that the fulfillment of the government’s promise over 20 years ago, is part of Muhammadu Buhari’s drive to embed integrity in the affairs of governance.

“This is consistent with the commitment President Muhammadu Buhari has made to make Nigerians proud of the country and to stand by and respond to needs of the citizens.”

Responding, Mr. Westerhof, who often describes himself as a Dutchgerian, said that he was elated for the gesture despite that the redemption of the pledge came 25 years late.