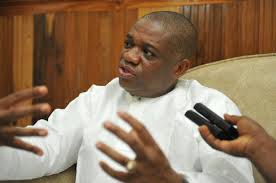 With election into the executive committee of the Nigeria’s football ruling body, the Nigeria Football Federation (NFF), former governor of Abia state, Orji Uzor Kalu has INDICATED HIS desire to contest for the position of the President of the body.

Kalu told sports writers: “I am interested in becoming the next president of the NFF. I will run for the position if the atmosphere is good.”

Kalu, who served as governor for eight years in Abia state, said that Nigeria will be the first African side to win the world cup, with him in charge, stressing: “I believe Nigeria can win the world if I become the NFF president.”

Elections into the NFF board have already been fixed for the 26th of August and it is on that premise that Kalu believes he become the next NFF boss.

There is some controversy presently in Nigerian football with a high court injunction sacking the board of the Nigeria football federation led by Aminu Maigari. [myad]