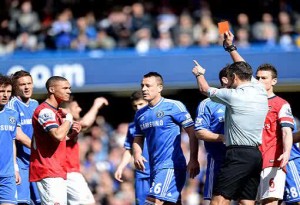 Everything that could have gone wrong did go wrong this afternoon in Arsenal’s visit to Stamford Bridge that ended in an unbelievable 6-0 rout by Chelsea.
Of course, fumbling referee Andre Marriner will have his fair share of the headlines for his hilarious/bizarre/terrible decision to send Gibbs off instead of Oxlade-Chamberlain. But more importantly this defeat surely heralds the end of Arsenal’s slim Premier League title hopes, as the Gunners, who dominated the top of the table for long, have now been pushed to the third position after Liverpool. Chelsea meanwhile march on with their biggest ever win over Arsenal which has helped them to consolidate their grip on the top spot.
The goals started coming quite early in the one-sided game. The following highlights adapted from a The Telegraph match report summarise the story:
•5th min: GOAL! Chelsea 1-0 Arsenal (Eto’o). Arsenal again give the ball away cheaply and Schurrle is the man to profit. His pass to Eto’o is slightly behind the Chelsea striker but he cuts back inside and curls the ball beautifully with his left foot from the edge of the box past a despairing Szczesny dive.
•7th min: GOAL! Chelsea 2-0 Arsenal (Schurrle). Yet AGAIN Arsenal lose the ball on the halfway line and it is worked forward to Schurrle down the right. The German advances and, with Eto’o dragging the defenders away with his decoy run, is able to pick his spot, driving a low shot low across Szczesny into the same corner that the Cameroonian found just moments earlier.
•16th min: RED CARD AND PENALTY! (Gibbs). Oh dear oh dear oh dear oh dear… Hazard has a shot from 8 yards out and Oxlade-Chamberlain, trying to head the ball wide, instead flings his hand at it and flicks it past the post. But WAIT A MINUTE!!! Referee Andre Marriner has sent the wrong man off!!!! He’s sent Gibbs off instead of Oxlade-Chamberlain. Erm…
•17th min: GOAL! Chelsea 3-0 Arsenal (Hazard). Easy as you like, straight down the middle and no problem for Hazard who makes it three for Chelsea.
•42nd min: GOAL! Chelsea 4-0 Arsenal (Oscar). And the camera pans to a disconsolate Wenger. Poor man. Great play from Schurrle who brings the ball down just inside the Arsenal half and knocks it into the path of Torres. The Chelsea substitute drives into the visitors’ box before unselfishly deciding to cut the ball inside to Oscar who is able to lift the ball over Szczesny from four yards out.
•66th min: GOAL! Chelsea 5-0 Arsenal (Oscar). It’s slightly harsh on Arsenal because they have been the better side since the break but the Chelsea fans are holding all five fingers in the air now. Oscar doesn’t get hold of his shot from just inside the Arsenal penalty area but the ball bounces in front of Szczesny, who has a bit of a nightmare failing to prevent it from bobbling into the net.
•71st GOAL! Chelsea 6-0 Arsenal (Salah). His first Chelsea goal! The Egyptian beats the offside trap and has as long as he wants to pick his spot as he latches onto a Matic throughball and bears down on the Arsenal goal. He selects the near post and Szczesny has no chance.