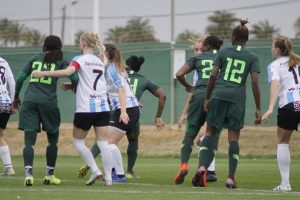 The world cup bound Nigerian female side, the Super Falcons woke up from a shocker in the 31st minute when Reimus Magda of Icelandic grabbed a goal for Solfoss, to embark on goal harvest.

Uchenna Kanu got a 42nd minute equalizer to keep both teams at par till the end of the first half.

On resumption of play in the second half, it became apparent that UMF Solfoss had no checkmate for rampaging falcons.

Courtney Dike opened scoring in the 57th minute of the second half even as Ini Umotong took over from Dike to earn a brace in the 62nd and 69th minute.

Courtney Dike completed her hat-trick when she again scored in the 72nd and 76th minutes and Thomas Dernneby coached team held on to their massive lead to the end of the match.

Goal Keeper Chiamaka Nnadozie was particularly impressive as she pulled a great save to deny their Icelandic opponents a comeback chance in the 89th minute. Rasheedat Ajibade was of great support providing assist for Dike’s hat-rick

The team will next take on Canada on the 8th of April as part of preparation for the World Cup in France.