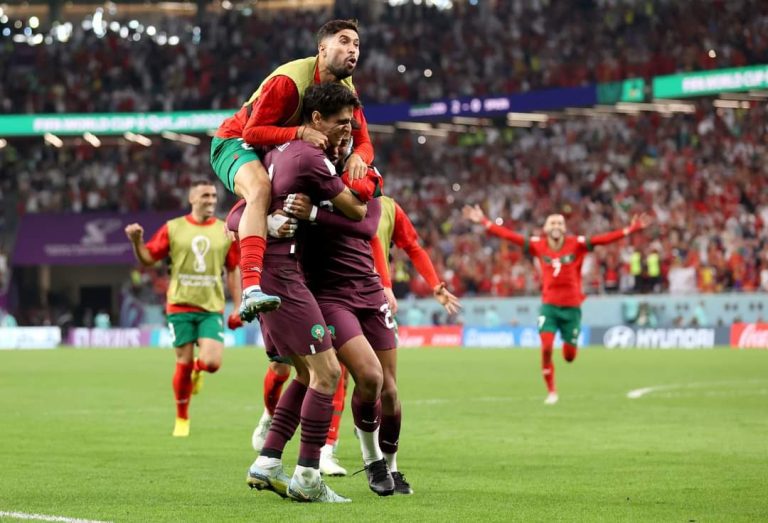 Morocco progressed into the quarter-final of the World Cup to book a mouth-watering tie against Portugal or Switzerland after beating Spain on penalties.

Spain’s bid to return to the summit of the world game saw them paired with Morocco in the Qatar 2022 Round of 16, after Luis Enrique’s side surprisingly finished second in Group E.

A shock 2-1 defeat to Japan in their final group game; the Samurai Blue’s second upset win of the group after beating Germany in their opener, edged La Roja off top spot.

Spain faced Group F winners Morocco in the first knockout stage and were unable to defeat the African team.

The North Africans have been one of the surprise packages in Qatar, with Walid Regragui’s team reaching the Round of 16 for the first time since 1986.

Spain were knocked out of both World Cup 2018 and EURO 2020 on penalties, and have won only one of their four shootouts in the World Cup overall.

Morocco, meanwhile, have never taken part in a World Cup shootout and it eventually ended in victory for the team.

In a cagey affair, Morocco started the game on the front foot with an intent to press and cause Spain some problems.

But once Luis Enrique’s side got hold of the ball, they dominated possession and Morocco decided to sit in a compact shape and they made it hard for Spain to create many chances at all in the first-half.

Dani Olmo had Spain’s best opportunity midway through the second period with a ferocious free-kick but the Morocco goalkeeper did well to palm the ball away from safety. Opportunities were few and far between as the game drew to a close – meaning extra-time would be played for the second time at the tournament.

Morocco then came the closest to opening the scoring in the first-half of extra-time through Walid Cheddira as he ran clean through on goal. It was a fine move from the Moroccans but substitute Cheddira fired his effort straight at Unai Simon – to the frustration of the majority of the fans inside the stadium.

After a barrage of attacks from Spain towards the end of the game, Morocco held out for penalties. And they were right to do so as the North Africans ran out 3-0 winners from the spot with Hakim Ziyech, Abdelhamid Sabiri and Achraf Hakimi scoring the decisive kicks.

Liverpool have been heavily linked with a move for Morocco’s Sofyan Amrabat in recent weeks after a string of impressive performances from the Fiorentina star during the World Cup. The 26-year-old produced another colossal display in front of the back-four and, for large spells, helped stop Spain’s midfield from playing passes into the forward areas.

Gavi, Sergio Busquets and Pedri possess so much quality on the ball, and Morocco needed to stay compact to ensure Spain didn’t dominate in the final third.

Amrabat’s pressing, intelligence and knack to make a tackle will no doubt impress potential suitors with the midfielder tipped to make the switch to the Premier League.

This continued into the additional 30 minutes as Spain tried to force a winner, and although they looked brighter in extra-time, they lacked quality and guile to break the deadlock. Pablo Sarabia almost scored in the 120th minute but crashed the outside of the post.

There was a huge representation of Morocco fans inside the Education City Stadium – and they didn’t disappoint by displaying a raucous atmosphere throughout the game. Behind both sets of goals, masses of Moroccans belted out the national anthem and were spotted roaring as their team attacked and went forward.

But they weren’t just getting behind Walid Regragui’s men. Morocco supporters whistled loudly and booed every time Spain had the ball, something that has been present at each of their matches. They did the same to Croatia, Belgium and Canada, and it certainly helped as they topped the group.

It proved to be a close tie between two well-matched teams and penalties were needed to decide the outcome of the game.