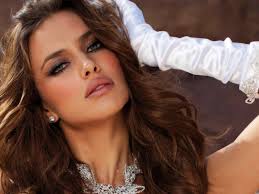 Girlfriend of the world’s best footballer, Cristiano Ronaldo, Miss Irina Shayk posed half nakecondary School, Chibok in Borno state by Bokio Haram over a month ago.
Shayk, 28,  is one the latest international celebrity that has joined the campaign for the rescue of the female students whose whereabouts is still shrouded in secrecy.
The super model’s involvement is now stirring up a storm. She wore a selfie posted to her Instagram account, holding up a card reading “#BringBackOurGirls!!!
The Russian beauty who is scheduled to grace the cover of this year’s Sport Illustrated Swimwear Issue has kicked off a controversy, with some fans accusing her of posting the selfie to promote herself while others say her half-naked photo would gain more awareness for the #BringBackOurGirls campaign.
Other international celebs who had earlier joined the campaign include Michelle Obama, Jada Pinkett-Smith and Leona Lewis.