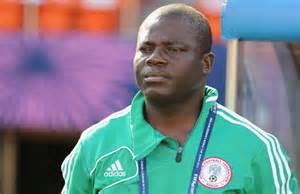 The Nigerian female national team, the Super Falcons, is set to begin preparations for the 11th All-Africa Games qualifiers, 2016 Olympic Games qualifiers and the 7th FIFA Women’s World Cup finals as the Head Coach of the team, Edwin Okon, has called up 36 players to camp.

The invited players were made up of 10 foreign-based and 26 home-based players and are expected to report at the Serob Legacy Hotel, Abuja on Sunday, February 22, with their training kits, international passports and birth certificates include.

The Falcons have an All-Africa Games qualifier away at Mali on March 22, with the return leg in Nigeria three weeks later. They will then clash with the same Malian side in May for a 2016 Olympic Games qualifying fixture.
The 7th FIFA Women’s World Cup finals take place in Canada June 6 – July 5, 2015.