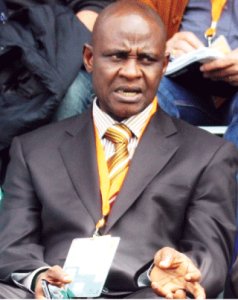 Political intrigues have taken over the Nigeria Football Federation (NFF) and threaten its unity as election into its executive council is fixed for August 26.
Information reaching us indicate that muffle compaints are flying around against the Electoral Committee, whose chairman, Amoni Bambo, is being accused by stakeholders, of having an agenda to exclude some people from participating in the elections.
Bambo has come under fire for what some of the would be contestants said, has been his using an official of the NFF to technically exclude some aspirants from participating in the elections by not allowing them to pick nomination form.
It was gathered that many aspirants have not been able to get the nomination form even as the same form has recently been sold to the Chairman of Kogi FA, Adams Yahaya but without receipt.
Another aspirant confirmed that he also picked the nomination form but without receipt, wondering “Is this not a technical way of pushing me out of the race?
“I am asking because the receipt is the only proof that I have the genuine form because I am aware there are some fake nomination forms out there.
“But when I asked for receipt, the officer that sold it, Banabas Joro, said it would be sorted out later. I think the Electoral Committee, as it is presently constituted, is biased and something must be done urgently.”
Our findings show that those who have indicated interest in contesting the elections but may have been denied buying forms are Abba Yola , Ganiyu Majekodunmi , Ishola Busari, Domnic Iorfa, Joe Anene, Lucky Gospel-Ewa, Ebel Ehige amongst others.
The aggrieved aspirants are alleging that the NFF General Secretary, Musa Amadu, Electoral Committee Chairman, Bambo, may be acting the script of Chris Giwa, owner of Giwa FC who is said to be eyeing the NFF Presidency and dropping the Minister of Sports’ name to manipulate the electoral body.
One of the agrieved aspirants warned: “the NFF Executive Committee must act urgently otherwise the crisis that will follow the elections will be unimaginable for our football. Some of us will head to court and damn the consequence.”
The release of guidelines for elections by the NFF spokesperson, Ademola Olajire, on Thursday, suggests that the sale of nomination forms may have been closed and many aspirants now stand denied rights to contest. [myad]