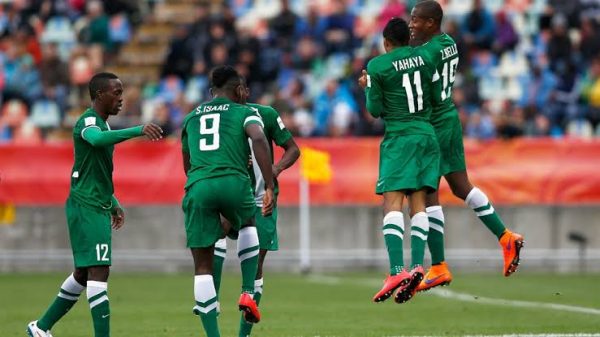 Qatar lost to Nigeria 0-4 in their Group D opening match at the FIFA U-20 World Cup in Tychy, Poland yesterday, Thursday.

Nigeria, runners-up to a Joao Pinto-propelled Portugal in 1989 and a Lionel Messi-inspired Argentina in 2005, went 2-0 up within 25 minutes – and both goals were indebted to their left-back.
Ikouwem Utin duped his marker and unleashed a swerving shot, which Shehab Mamdouh could only push into the path of Maxwell Effiom, whose first-time volley broke the deadlock.
The Nigerian then somehow sprung four challenges down the left and cut the ball back to present Okechukwa Offia with a comfortable finish from close range.
Qatar did have their chances as Zulkifilu Rabiu catapulted himself across the Tychy turf to make an outstanding block from Yusuf Abdurisag, and Nigeria goalkeeper Olawale Oremade was alert to break up a three-on-one break from which the underdogs should have made more.
They were further punished when midfielder, Tom Dele-Bashiru making it 3-0 before Aliu Salawudeen’s completed the rout. The teams return to action on Monday, when Qatar face Ukraine and Nigeria encounter USA.
Meanwhile, New Zealand produced the nation’s biggest win in FIFA U-20 World Cup history with a 5-0 rout of Honduras in a Group C match.

Darwin Diego inadvertently steered the ball into his own net just eight minutes into the match, and that unfortunate moment seemed to deflate Carlos Tabora’s side.

After that, New Zealand took full control of the match as Ben Waine had a brace to his name midway through the first half.
The second half continued in much a similar vein to the first. New Zealand maintained their dominance with Sarpreet Singh and Matt Conroy adding a fourth and fifth goal to ensure the Kiwis made history to commence their Poland 2019 campaign.