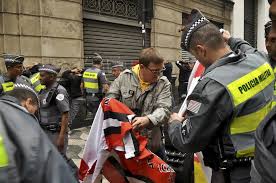 Overzealous Brazilians were said to have launched an attack on England fans in Brazil at a bar in Sao Paulo near Fifa’s Fan Fest, leaving no fewer than 10 people being hospitalized for various degrees of injuries. The attackers, out of which fifteen of them have been arrested by the Brazilian police, were said to have thrown fire crackers at their victims.

Brazilian police have confirmed that they arrested 15 people following the attack outside two bars on the Avenida Sao Joao. It happened at around 1.30pm local time, two-and-a-half hours before England’s crucial Group D clash with the Uruguayans began.

Police have said that all those arrested were Brazilian, and they were seen wearing hoods and dark clothing when they allegedly threw a bomb towards fans standing outside the Guanabara Bar and the Planeta Fruta snack bar. Other reports claim that petrol bombs and mortars were used in the attack.

They also reported that they seized six rockets, a set of brass knuckles, a dagger, a mouth guard and fireworks from the group, who were seen to hurl mortars at the fans before ripping up the St George’s Cross flags that the England fans had in support of Roy Hodgson’s side. [myad]