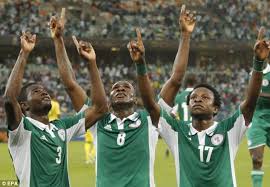 Nigeria Supper Eagles will play their first group match on Monday with the Persian Stars of Iran in the ongoing 2014 World Cup in Brazil.

The two teams in 1998, had their first encounter in an international friendly in Hong Kong where the Eagles defeated the Persian Stars by a lone goal.

The 2014 World Cup will be Iran’s fourth appearance and they are currently ranked 55th by FIFA and as for Nigeria ranked 44th, it will be their fifth appearance.

The Persian Stars have so far not been able to progress beyond the group stage of the Mundial having only won once in their second appearance against the U.S.

The Super Eagles, on the other hand, have progressed twice from the group stage, USA 1994 and France 1998. They have, however, failed to do that in their last two appearances.

It will be recalled that during Iran’s qualifying process, they scored a lot of goals in the preliminary stages until in the group stage, where they encountered a lot of challenges.

And Nigeria was able to scale through the preliminary stages and the playoff with less goal scores, but with less anxiety.

In the Eagles squad are more foreign-based players who ply their trade in known clubs in England and Europe more than Iran.

Paul Hamilton, a former Coach of the Super Falcons, said that the Eagles know what is at stake in losing against Iran.

“They know what is at stake, knowing that the first match is very dear to us. They will do all they can but not with anxiety, and if they secure that match, we will move beyond the group stage.”

Tony Otah, a former coach of Bendel Insurance of Benin, wished the Eagles well, adding: “I know Nigerians are wishing the Eagles the best of luck in the Mundial though I am not so scared of Iran. But I must advise that Iran should not be underrated because they like other countries have prepared well for the World Cup.

“I know we defeated them in a friendly, but there is a difference between an international friendly and a competitive match like the World Cup. So, no one should get carried away.”

Nigeria is in Group F with Iran, Bosna-Herzegovina and Argentina.