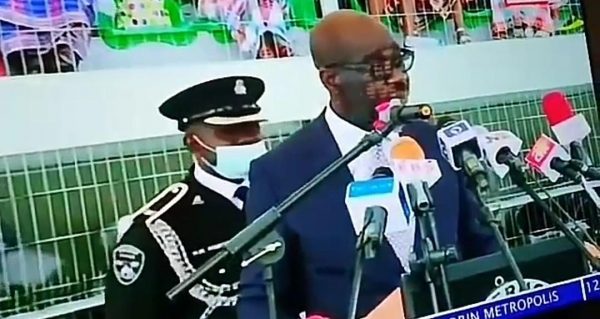 The incident occurred at about 12 noon at the time the governor was delivering his inaugural speech after the Oath of Office was administered by the Chief Judge of the State, Justice Esther Edigin.

The well-kitted ADC, whose name was yet to be confirmed as of the time of filing this report, stood behind the governor during the speech but slumped.

Four other aides around the governor attended to the ADC as Obaseki ended his about 20-minute speech.

Governors of the Peoples Democratic Party (PDP) at the inauguration include  Nyesom Wike of Rivers State, Aminu Tambuwal of Sokoto State, Ifeanyi Okowa of Delta State, and Duoye Diri of Bayelsa State.

PDP National Chairman, Uche Secondus, was also present at the event with some other party officials.

See also:  Nigeria May Be Heading To Worse Situation Than what It Is Now If - Osinbajo

Obaseki had defected to the PDP from the All Progressives Congress (APC) after he was denied the ruling party’s ticket in the primary election due to intra-party wranglings.

He later defeated the APC candidate in the September 19, 2020 governorship election, Osagie Ize-Iyamu.