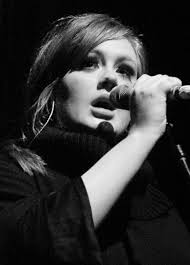 A British singer and song-writer, Adele, 26, has topped the list of the richest people in music under 30, having amassed an estimated £45 million with her two chart-topping albums so far.

Adele, who has not released an album since 2011, however remains Britain’s richest musician under the age of 30, according to the Sunday Times’ annual rich list.

It has been another successful year for the singer, who is estimated to rank wealthier than One Direction and Calvin Harris. The Oscar-winning 26-year-old, who recently dropped a hint that her third album would be released at the end of 2014, is said to be worth £45m, a £15m increase from last year’s takings and over double that of 2012.

Just behind Scottish DJ Calvin Harris, who is currently No 1 in theUK singles chart with the track Summer, are the five members of One Direction. Harry Styles, Liam Payne, Zayn Malik, Niall Horan and Louis Tomlinson all appear for the second time on the list.

This year, the group are reportedly worth an estimated £14m each, almost triple the amount of 2013’s earnings. Collectively that makes One Direction the richest boyband in British music history, with a combined wealth of £70m.

While much of the UK’s music rich list is made up of businessmen and producers, the under 30 list is more squarely focused on musicians

This year’s list includes a number of pop and rock band members, including One Direction, Arctic Monkeys’ Alex Turner and Mumford & Sons

Elsewhere, X Factor winner Leona Lewis entered the list at No 9, joint with Mumford & Sons’ Marcus Mumford and his wife, the actor Carey Mulligan. While last year’s list was primarily dominated by female pop acts, this year sees an increase in alternative acts. Mumford band members are not far behind their frontman on the list, with Ted Dwane, Ben Lovett and Winston Marshall each earning an estimated £8m, and Arctic Monkey’s frontman Alex Turner with £9m.

Warner Music Group owner Len Blavatnik tops the list of the wealthiest people in music in the UK and Ireland, with an estimated worth of £10b, despite his wealth decreasing by £1bn over the past year. Musicians U2, Elton John and Paul McCartney also feature high on the list, while One Direction label boss and media mogul Simon Cowell also sees his fortune grow to £300m.

Richest people in music in the UK and Ireland: