Home ART & ENTERTAINMENT The Real Face Of Nigerian Musician, Lagbaja, Without The Mask 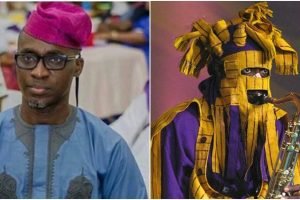 Lagbaja, a Nigerian music star, whose real name is Bisade Ologunde, has been off the Nigeria’s musical stage for a long time now.
Bisade, with stage name as Lagbaja (meaning ‘anonymous’ or ‘faceless one’ in Yoruba) is an African Traditions.

He formed his first small band in 1991 in Lagos after he had taught himself to play the saxophone. The masked musician is now based in Manhattan, New York, USA.
According to Òpátàmèdù (pronounced Òpá tàmèdù), his mask is used as an identity.
Tàmèdù is a Yoruba word that means “nobody in particular”. And the Òpá identifies Talking Drum Stick.
He derived from an icon called Lágbájá. And named himself Òpátàmèdù as a symbol of being majorly an African Traditional performing artist that based mostly on African Talking drums.

See also:  Emir Of Daura Advises Buhari Not To Be Disturbed By Peoples' Insults, Criticisms