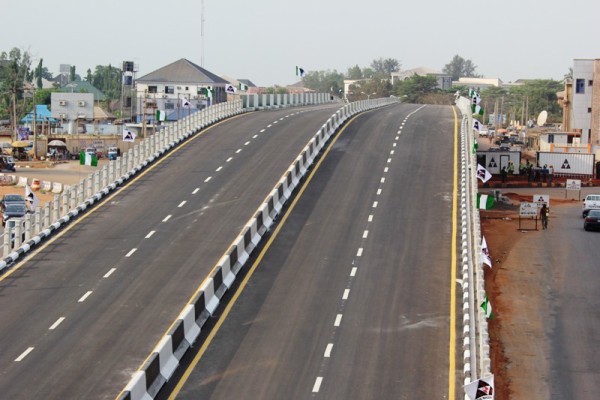 Delta state Governor, Dr. Emmanuel Uduaghan has commissioned a 3.5 billion naira 120 metre-long six span  flyover bridge, constructed by the state government to enable the state capital to take its rightful place as one of the best state capitals in the country.

Speaking at the ceremony in Asaba Thursday, Governor  Uduaghan said that the project was part of his administration’s urban renewal programme meant to improve the social economic and political lives of the people.

“A lot of things have happened in the state capital and it is assuming  the status of a befitting state capital, at the beginning we started with the airport, the new government house then we did the schools and the health sectors, very soon an ultra modern hospital will  be completed. ”

“We have done a lot in Asaba to make it a befitting state capital. This project started two years ago, not eight years ago and today, we are commissioning it.”

He observed that the flyover was very strategic as it will ease traffic on the road which connects Edo State and reduces time of journey from Asaba to Abuja and the northern parts of the country.

“The flyover is very strategic, it is on the road that leads to Abuja, with the completion of the Utor bridge at Ebu, which constitute an arterial road from the South-South and South –East States through Edo state to Abuja and other parts of Northern Nigeria, this flyover bridge is very timely.”

Dr. Uduaghan assured Deltans that his administration would continue to execute projects and called on the people to vote for the gubernatorial candidate of the Peoples Democratic Party (PDP), Senator Ifeanyi Okowa and the House of Assembly candidates of the party during the elections.

The commissioner for Works in the state, Hon. Funkekeme Solomon in an address, said the flyover bridge located at the intersection of Nnebisi, Okpanam, Anwai roads was awarded to “Messrs CCC Construction Company Nigeria Limited by the state government in 2013 at a contract sum of N3, 528, 939, 077.63.”
“The scope of the works included a 120 metre-long six-span bridge, two ramps of about 140 meters each on either approach bringing it to a total of 400 metres long,” he said, noting, “the entire bridge/ramps structure is a four-lane dual carriage way, comprising of two in each travel direction demarcated with a New Jersey Barrier.”