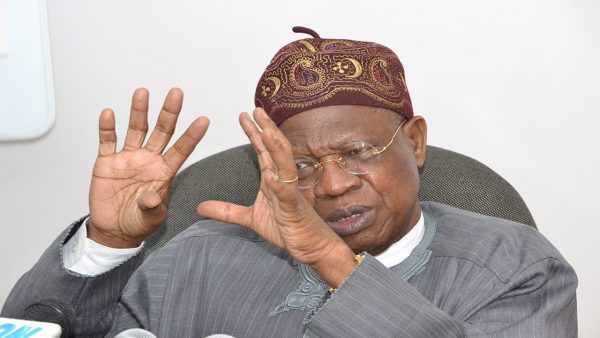 The Nigeria’s minister of information and culture, Lai Mohammed, has said that the Federal Government is closely monitoring the current development of the microblogging platform, Twitter under the new ownership, Elon Musk.

The minister’s pronouncement is coming against the backdrop of recent sharp increase in fake news, disinformation, and hate speech, especially since Twitter changed ownership.

Speaking to newsmen in Abuja, today, November 10, Lai Mohammed said that the federal government has no intention of banning Twitter again, but that it should not fall into the same trap that led to its ban months ago.

He recalled that last year’s suspension of Twitter was due to its use by those elements that are working at destabilizing Nigeria via fake news, disinformation, and hate speech.

The minister said that the federal government has no intention of banning any media platform from performing its duties, however, noted that it would also not allow any platform to be used to plunge the country into anarchy.

Answering a question on whether another Twitter ban is coming following new ownership, Lai Mohammed said: “we have no intention of banning any social media platform again. But we will also not sit by and allow any platform whatsoever to throw our nation into crisis.

“Let me say this, we are closely monitoring the evolving developments at Twitter. It has never been our intention to ban any social media platform or stifle free speech. Not at all!

“Many have called to ask us what will become of our agreement with Twitter given the change in its ownership and they have also asked for our reaction following reports that there has been a spike in fake news, disinformation, and hate speech since the micro-blogging site changed ownership.

“We have also been asked if there is going to be another ban. What happened in the case of Twitter is well-known to all. Twitter became a platform of choice for those who want to destabilize Nigeria, using fake news, disinformation, and hate speech.

Recall that in June 2021, the federal government suspended the operations of Twitter indefinitely in the country, citing double standards by the microblogging and social media platform, and the persistent use of the platform for activities that were capable of undermining Nigeria’s corporate existence.

However, in January 2022, President Buhari approved the lifting of the ban on the micro-blogging platform.

Elon Musk earlier in October completed the $44 billion Twitter acquisition deal and has since then introduced controversial new offering such as selling Twitter verification status.