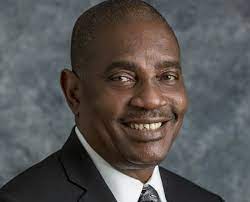 Former inspector General of Police (IGP), Dr. Solomon Arase, has expressed concern over some challenges posing threats to the smooth conduct of 2023 general elections in Nigeria.

Arase, who runs a law firm and is also a security consultant and trainer, spoke yesterday, October 6 as a panelist at the 6th edition of the Annual General Conference of the Guild of Corporate Publishers at the Sheraton Hotel in Ikeja, Lagos.

The security expert said that whereas the Public Order Act debars the police from stopping public protests and processions, the Electoral Act, Section 91 (1-4) mandates the same police to monitor and control political rallies.

The ex-IG said this puts state Commissioners of Police in dilemma, requiring them to think outside the box and act creatively in such ugly situation. He said that some political parties prefer to rush and fix their own rallies when they hear that their opponents fixed theirs, thus causing propensity for clashes that would need the intervention of a police commissioner in the face of laws stopping the same police commissioner from stopping rallies.

He said the Electoral Act sets aside sensitive roles to the police from pre-election to election proper and to post election periods.

On outcry by political parties that the winner of an election rigged it, the Super Cop said that all of them try to manipulate elections, especially in areas where a party has advantage.

Arase said that another challenge has to do with manpower crisis whereby many policemen are drafted to protect very important personalities (VIPs).

He wondered where the police would get enough manpower to man the elections across the land.

He complained about ‘non-state actors’ who he said, have taken over security space across the country, adding that they would pose a big threat during elections.

He reminded Nigerians that though all security agencies participate in elections but that it is the police force that has overall responsibility.

He thus wondered what would happen where a security officer is higher in rank than the highest ranking police officer in a particular location in terms of command, adding that these matters needed to be resolved ahead of the elections.

Arase who retired on June 21, 2016, said he has just concluded training of over 600 police officers for election duties.

Reacting to the matter of prosecution of electoral offenders, the INEC chairman put the blame squarely on the legislators who he said cleverly put the task on INEC.

He wondered how iNEC was asked to prosecute offenders when it did not have the power or the manpower to carry out arrest and investigation needed for prosecution.

“There have been several recommendations for setting up of electoral offences tribunals to try offenders but they have not been set up.”

Prof Yakubu however said there is hope because some National Assembly members have sponsored private members bill on electoral tribunals and that INEC has gone to lend support.

Dr Chichi Aniagolu-Okoye of Ford Foundation lent her support for prosecution of electoral offenders and said the 2023 elections would make or mar Nigeria. 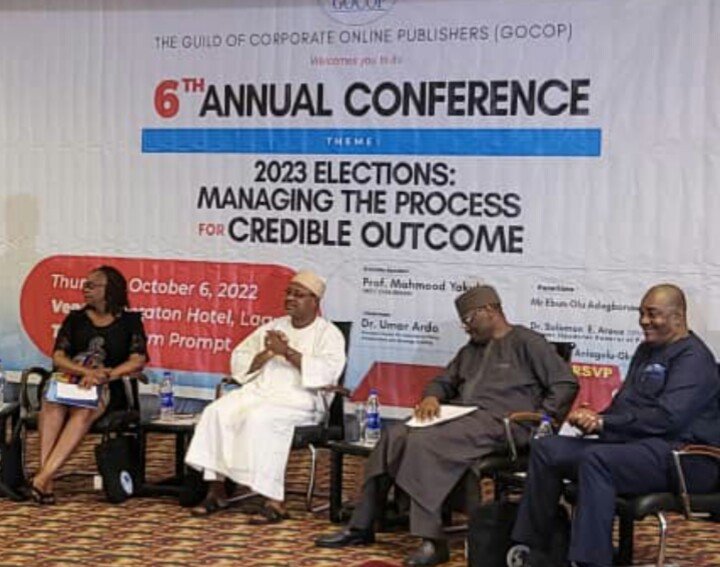 In her welcome address, the President of GOCOP, Maureen Chigbo, publisher of RealNews said the 2023 elections would be very important to Nigeria and that INEC was very important in what happens in 2023.

She used the opportunity to explain the critical roles of the online publishers and the huge efforts to sanitise the online space. She called on corporate bodies to support GOCOP in this task by doing business with GOCOP members instead of blackmailers.

She revealed that with induction of 13 new publishers, GOCOP now has 94 corporate members.

Meanwhile the Ford Foundation has said that the 2023 election is being viewed around the world as not just a time to put people into offices but an opportunity for Nigeria to witness a turnaround and become a giver of opportunities instead of receiver.

The regional coordinator of the Foundation, Dr. Chichi Aniagolu-Okoye, at the Conference, said that the 2023 elections would bring in people who may either make or mar the country’s future.

Cautioning that credible election is the backbone of any democracy, the philosopher and development expert made it clear that election is not just to pick leaders or just to get your man into position.

“The winner is to make or mar you for four or eight years.”

She revealed some privileged information showing that some Asian countries may have ordered ban of visa to Nigerians. “This means a lot. It shows how Nigeria is regarded right now in most places out there. Nigeria is now below the bottom, not just at the bottom.”

For this, she appealed to those contesting elections to realize that there is the urgency to save Nigerians by rebuilding the nation because other countries may not have further space for fleeing Nigerians. “Those contesting should know that they have a responsibility to rule well for everybody.’

Dr Aniagolu-Okoye raised posers to Nigerians fleeing abroad to seek succor; “We all want to run to countries ruled by people we do not know, people who are not from our communities, who are not our brothers, but we trust them to do well enough for us and trust them enough to go to their place and seek jobs and scholarships.

“Have we ever cared to ask how we trust them? Do we work so others can trust our place and come to seek favour?”

She said the Ford Foundation, one of the biggest in the world, has set aside some support to help sensitise Nigerians towards better election in 2023 because of the criticality of the upcoming exercise.

“This is because elections affect all other things we may want to implement.”

“This is because we have proved wrong those who said we cannot rule ourselves.’

On the Independent National Electoral Commission (INEC), she said: “We need to commend INEC on the new Electoral Act which we consider a quantum leap. We must thank them for pushing and getting approval for use of technology. There is much we can do with technology to sanitise and improve our electoral processes.”

The regional coordinator however said INEC needs to do more to cut down on paperwork at elections as is being done in other countries.

“We should seek technology to replace ballot paper.’

On electoral offenders, she said: “There is need to hold culprits accountable and hold the police and the judiciary responsible to do what is right. Else, work of INEC would go to nothing.

“Our electoral campaigns are too abusive, divisive, and banal. I urge GOCOP to do more on stopping irresponsible reporting, apart from fake news. There is news that is not fake but creates harm and threats.’

She urged Nigerians to realize that there would still have to be a nation after election.

“We must stop reporting to create bias. Remember Rwanda and Ethiopia did not happen overnight, they started gradually. It is the way the media pushed them till things went too bad. We need caution.

“Sanitising our internal democracy is now urgent. Monetisation of the primaries/electoral process is a big threat because it may lead to power only to the highest bidder.”

The expert called for quickening the process of picking permanent voters cards (PVCs) which are hitherto very hectic. We appeal to INEC to see what it can do to introduce a faster process.”

She appealed to media not to commercialise news but to seek better ways of funding to sustain the independence of the media.