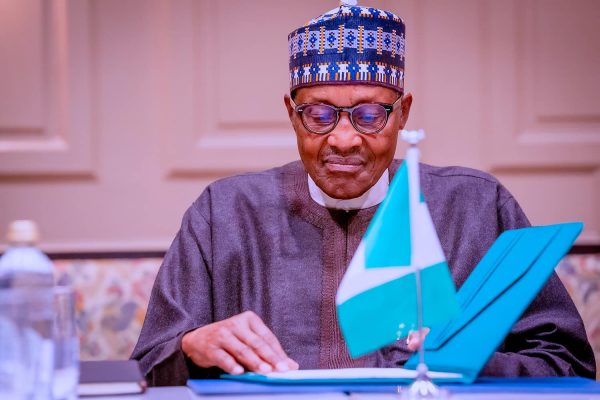 President Muhammadu Buhari has said that Nigeria, being the Africa’s largest single market, remains the best destination for American investors to put their money

According to the President, aside the population advantage in size and demography, various incentives and policies that have been emplaced by the Nigerian Government, make it a destination of choice for investment.

Buhari spoke today, December 16, in Washington D.C, at the U.S – Nigeria Business and Investment Forum, Business Roundtable organized by the American Corporate Council on Africa (CCA) in conjunction with the Federal Ministry of Industry, Trade and Investment, on the sidelines of the US-Africa Leaders Summit.

President Buhari said: “it is imperative that I reiterate at the outset, the comparative advantages that exist within the Nigeria’s economy.

“First as the most populous country and largest economy in Africa, there is no doubt that Nigeria remains Africa’s largest single consumer market, projected to account for over 15% of overall growth in Africa’s spending, by 2025.

“Secondly, investors in the country would have access to new markets under the African Continental Free Trade Area, (AfCTA), which would be the world’s largest free trade area, would be expected to connect 1.3 billion people across 55 countries and a consumer market that will be worth over $3 trillion by 2030, and a combined Gross Domestic Product (GDP) valued at US$3.4 trillion.”

He said that since 2015 when he assumed office as President, he had embarked on fixing of the infrastructural gaps needed for business to thrive, saying that such infrastructure include roads, railways, air and sea ports, energy and telecommunications, adding that these infrastructure constituted greater priorities for Government.

He said: “related to these conscious and practical efforts, is the resolve by our Administration to improve the business environment through business incentives, regulatory reforms and visa-regime that are business-friendly.

“The outcome of the massive efforts and investments by our administration in Infrastructure Development and Refurbishment, i.e. Road Construction and Rehabilitation, Investment Tax Credit Policy, led to the reconstruction of 21 selected Federal Roads, totaling 1,804.6 KM. With regards to railways, sea and air ports as well as energy, which are expected to facilitate movements of people, goods and services as well as sustain the stabilization of industries and their growth respectively.”

President Buhari saide that despite the global challenges occasioned by COVID-19 and the war in Ukraine, the Nigerian economy has continued to record impressive growth in many sectors:

“On economy, Nigeria like other countries , including the developed economies, is facing economic challenges, occasioned by the disruptions as a result of the COVID – 19 pandemic the ongoing Ukraine war and the Climate Change, in which massive flooding is one the manifestations.

“Notwithstanding these global challenges, Nigeria had witnessed seven consecutive quarters of growth, after the negative growth rates recorded in the 2nd and 3rd Quarters of 2020. Nigeria’s GDP grew by 3.54% year-on-year in real terms in the 2nd Quarter of 2022, which represents a sustained positive economic performance, especially for the Non-Oil GDP which fell by 4.77% in Q2 2022 against Oil GDP that grew by -11.77%.

“Statistics continue to indicate that most sectors of our economy recorded positive growth despite these challenges, which reflect the effective implementation of the economic sustainability measures introduced by our Administration. For our economy to favourably meet up the global digitization, Nigeria embraced Communication and Digital Economy. Already, the broadband coverage of the country stands at 44.32% and 77.52%. 4G coverage has also been achieved, with the establishment of 36,751 4G base stations nationwide.”

Buhari gave details of the sustained efforts of his administration to reverse the pervasive state of insecurity he inherited, especially in the Northeast, even as he commended the government of the United States for the support it has rendered in this aspect.

“When our administration came to power in 2015, most of the North-East of Nigeria was under the control of Boko Haram Terrorist Group. Governance and Socio-Economic activities came to stand-still. This state of happening has today been reversed.

“Internally Displaced Persons (IDPs) are returning to their ancestral home-areas, rebuilt through efforts by the Borno State Government and some philanthropic individuals, to recommence their lives in relative peace. As a country and sub-region, we continue to make sustained investments and efforts to strengthen our national and sub-regional security.

“In such circumstances, Nigeria continues to treasure strong partnerships with friends and allies in our national, continental and global efforts for safety and survival.

“We thank the United States of America for her partnership and as an ally, which made it possible to acquire arms, weapons and other military hardware, which has assisted Nigeria in her efforts to contain the scourge of terrorism and maritime insecurity.”

The Nigerian leader spoke about the plans of his administration to ensure that the problem of energy supply is addressed in the immediate future.

“In the pursuit of our energy development, Nigeria remains mindful of her commitment to carbon neutrality by 2060. In this regard, our administration launched an Energy Transition Plan (ETP) in September, 2022 aimed at meeting the national energy needs, in line with Nigeria’s net zero target.

This was even as the Minister of Industry, Trade and Investment, Otunba Adeniyi Adebayo, said that Nigeria is politically stable and ready for more investments and that the trend will continue because President Buhari has put in place electoral reforms that are enduring, giving room for free, fair and transparent elections.

In her remarks, Ms. Florie Liser, President of CCA said that the organisation has been around since 1993, promoting US and African business and investment relationships.

“Gathered here are CCA members, partners and investors that doing great works in Nigeria. They have a strong interest in sealing their operations there.”

She said that the organisation had been privileged to also host past presidents, governors, ministers and numerous private sector leaders to cement trade ties and facilitate investments between the US and Nigeria for the benefit of the people of Nigeria and American people. She described Nigeria as a priority country for the CCA.