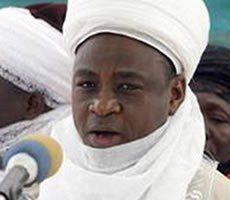 The Sultan of Sokoto and President General Jama’atu Nasril Islam,  Alhaji Muhammadu Sa’ad Abubakar, has asked Muslims in Nigeria to increase in their prayer today, July 8, which is Arafat Day, for Allah to end the insecurity ravaging the country.

Speaking against the backdrop of Tuesday’s twin devastating attacks on the convoy of President Muhammadu Buhari’s advance team to Daura, Katsina state and Kuje Correctional Center, where a security agent was killed, two others were injured and the prison gate opened for all inmates to escape, the Sultan tasked the Muslim ummah to take advantage of the grace of Arafat Day to beseech Allah for end to all issues of insecurity across the country.

The Sultan, in a statement signed by the JNI Secretary General, Dr. Khalid Aliyu, said the Arafat Day is the best day of the year when Allah forgives sins, listens to prayers and accepts them. Thus, Muslims are urged to fast on that day and make supplications to Allah for their needs and challenges.

“Considering that two events are coinciding on Friday and the need to remind Muslims to fast the 9th of Dhul-Hijjah (Arafat), cannot be overemphasized, just as it is mandated by the Prophet (SAW) and having fallen on such a special day – Friday, being the best day of the week, wherein Jumu’ah prayer is observed and prayers are answered in a specific Sa’a (hour) and Arafat – the best day of the year, wherein standing for it, is observed by pilgrims, and Allah, the Most benevolent forgives and answers all supplications on the Arafat day gracefully.

“Thus, His Eminence, Alhaji Muhammadu Sa’ad Abubakar, the Sultan of Sokoto and the President-General, JNI, urges Nigerian Muslims to fast the day, as was recommended by the Prophet (PBUH) and to equally pray ceaselessly to Allah, the Most High for His quickest intervention. Nigerian pilgrims are also implored to specifically pray for Nigeria and its leaders, while standing for the Arafat.

“He implores us all to dedicate special prayers against all the menaces and the hydra-headed calamities (of insecurity, poverty, high cost of living and corruption) occurring in Nigeria,” he said.