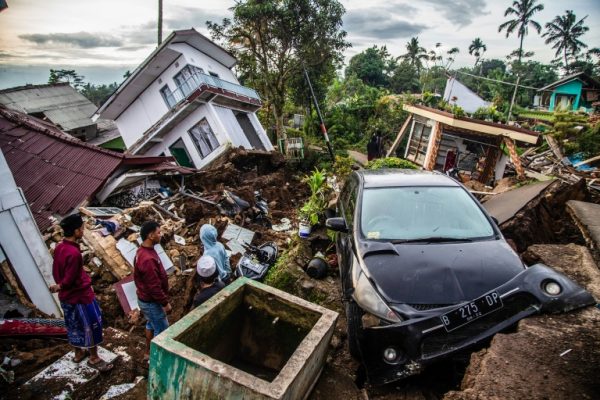 A deadly 5.6 magnitude earthquake, rocked the Island of Java, Indonesia today, November 21, burying alive over 40 people and many others injured.

According to the United States Geological Survey, the quake centered in the Cianjur region of West Java but felt as far away as the Indonesian capital, Jakarta, leaving thousands of buildings destroyed by the landslide.

A spokesman for the local administration in Cianjur town, Adam confirmed that dozens of people have been killed in the tragic incident.

He said: “There have been dozens of people killed. So far, 44 people have died”

A government official from Cianjur, Herman Suherman, told newsmen that about 20 people were killed and 300 more injured.

He added that most of the victims had fractures from being trapped by the ruins of buildings and there are families in the village that have not been evacuated.

He said: “The information I got for now, in this hospital alone, nearly 20 died and at least 300 people are being treated.

“Most of them had fractures from being trapped by the ruins of buildings.

“We are currently handling people who are in an emergency state in this hospital. The ambulances keep on coming from the villages to the hospital.

“There are many families in villages that have not been evacuated.”