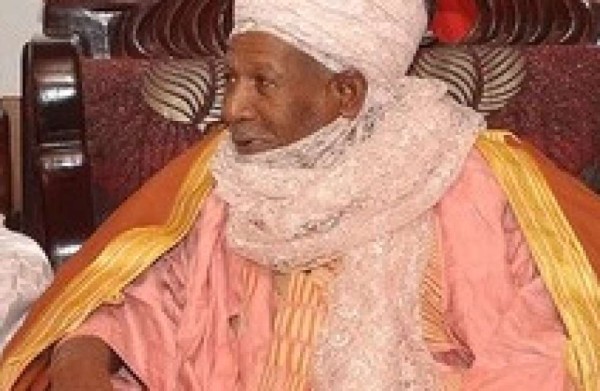 Emir of Gusau capital of Zamfara state, Alhaji Muhammad Kabir Dan Baba who just conferred the traditional title of Garkuwan Manoman Zamfara on President Goodluck Jonathan during his visit to Gusau on January 19 this year is dead. The Emir died today at the age of 88 in a private hospital in Abuja, the nation’s federal capital territory.

The Emir died after a protracted illness and has been bedridden first, at Yariman Bakura Specialits Hospital, Gusau since last month and was transferred to a private hospital, in Abuja recently. He was survived by 37 children and many grand children
This was even as President Jonathan sent the words of sympathy to the government and people of Zamfara State for the loss of the Emir whom he said was “highly revered.”
The President said that late Alhaji Muhammad was one of the longest serving traditional rulers in Nigeria, having been appointed District Head of Gusau in 1984 before being upgraded to 2nd Class Emir in 1997 and 1st Class Emir three years later.
The President said that the late Emir would be greatly missed by the people of Gusau  whom he ruled with great wisdom and understanding for more than thirty years.
He described the late Emir as just, fair-minded, pious, courageous and benevolent even as he asked members of his family and the people of Gusau to give thanks to God for his long and very fulfilled life of exemplary service to his people and country.
The President prays to God to grant Alhaji Muhammad eternal rest and bless the people of Gusau with a worthy successor to the late Emir who will build on the commendable legacies of progress and development. [myad]