Home NEWS I Believe President Of Nigeria Of Igbo Extraction Will Be A Reality... 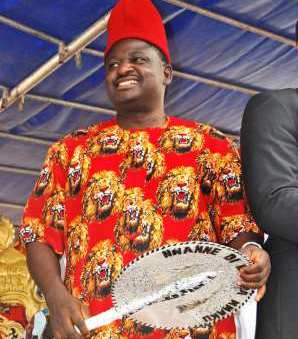 Special Adviser to President Muhammadu Buhari on media and publicity, Femi Adesina has expressed his belief that President of Nigeria of Igbo extraction is a reality in the country.

Receiving a delegation of Igbo Friends and Onyebuchi Chris Ifediora (OCI) Foundation, that felicitated with him on the conferment of the National Honour of the Officer of the Order of the Niger (OON), by President Buhari, Adesina said that he has always been passionate about Igbo people producing the Nigerian President.

“At the Sun Newspapers, I used to write about the Southeast and the need for a President of Igbo extraction and what the people of the area needed to do to achieve it. I know that it would be a reality in this country.”

He said that the country stands to benefit more when all the components of it unite in confronting the ills besetting the land rather than sectionalising it.

“I am very happy to have you as my guests. It gives me great joy when I receive visitors from other parts of the country. One of you is from Benue (State) and others are from the Southeast.

“It shows the brotherhood in us; Nigeria is one country, indivisible.

“You have demonstrated it by coming to congratulate me for the National Award. I took two chieftaincy titles (Nwanne di Namba from Mmaku, Enugu State, and Ugomba of Isieketa, in Abia State), because of where they came from; to show that we are really one.”

This was even as the leader of the delegation, Rev. Austin Ify Epunam (JP), who doubles as President of the SweetHome Africa and National Champion of Onyebuchi Chris Ifediora (OCI) Foundation, said that he was excited for the well merited honour bestowed on the Presidential spokesman.

He said that OCI Foundation is a non-governmental, non-profit and non-political organisation established with the aim of breaking down barriers to the attainment of excellence.

“I have always followed your write ups, especially about President Buhari way before the elections that brought him to power during your days at the SUN. I enjoy your calmness while dealing with individuals and issues. You are a problem solver.

“We should look at antecedents, the foundation of everyone before giving appointments. You were appointed spokesman, it’s God that sent you here and He will see you through, successfully,” Rev. Epunam said.