Home NEWS Jonathan Says His Government Is In Injury Time, As He Swears In... 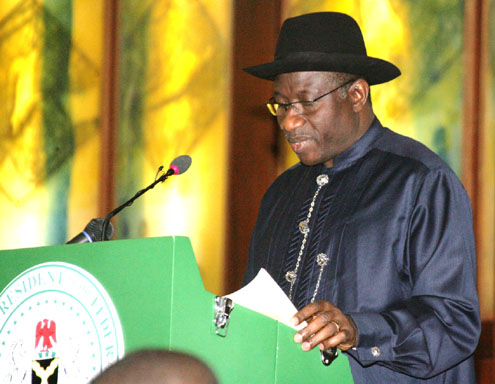 President Goodluck Jonathan has told the new ministers whom he swore-in today at the Presidential Villa, Abuja that they are coming in at injury time, when his government is winding up.
“For the ministers this is an injury time. It is like bringing a player when you have just five minutes to go in a football match. So everyone wants to know what that player will do; the magic the player will perform within that short period. The player himself will be struggling to at least kick the ball beforre the end of the game.
“So you are coming in at a quite challenging period and I believe that a number of people will not envy you because government is coming to a close. But sometimes is even good to come at this time because you are now well exposed to Nigerians.
“Your dancing steps will be watching by everybody and ‎we believe you will dance well.”
The President who also carried out minor cabinet reshuffle as Dr.  Alhassan Khaliru‎ was made Minister of Health while Engr. Fidelis Nwankwo, (Ebonyi State) became minister of state for health, swore-in Senator Patricia Akwashiki ‎ (Nasarawa) ss new Minister of Information.
Others swore-in were Professor Nicholas Ada (Benue) – Minister of State Foreign Affairs 1‎, Colonel Augustine Akobundu (rtd) (Abia State), Minister of State Defence, Mrs. Hauwa’u Lawan Bappa, Minister of State Niger Delta Affairs, Kenneth Kobani (Rivers)‎, Minister of State Industry, Trade and Investment, ‎Senator Jeol Danlami Ikenya (Taraba), Minister of Labour and Senator Musiliu Obanikoro‎. (Lagos) – Foreign Affairs I.
President Jonathan who also swore in two commissioners for Federal Civil Service Commission, Dr. Jonah Madugo who represents Benue, Plateau and Nasarawa states and National Population Commission, Mrs. Abimbola Ogundeyi said that civil service remain the key engine room of government.
“The greatest problem that people complain about is the issue of discipline etc, in the service.‎ I believe that with you coming to join others you will continue to modernise the federal civil service.
“Of course, population is key for the National Population Commission, we are thinking of how to go for another head count.
“And every country wants to know the exact population for the purpose of planning and all that. I believe it is a good team and listening to your citations all of you are eminently qualified to hold any office in this country. And we believe that you will join us to serve our nation.”