Home NEWS POLITICS INEC To Davido: Don’t Drag Us Into Politics Over Certificate Of Return... 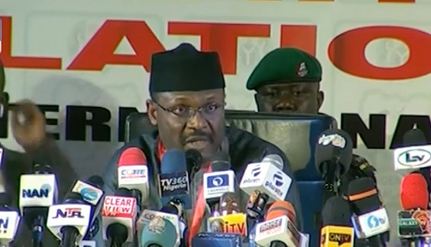 The Independent National Electoral Commission (INEC) has asked the nephew of Ademola Adeleke, the Osun Governor-elect, Davido, not to drag it into politics over the issuance of a Certificate of Return to Adeleke that was declared winner of the governorship election held in the state last week Saturday.

“Those that intervene and play roles in the electoral process should try to have basic knowledge of the constitutive legal instruments that guide and regulate the conduct of elections.

“The Commission is a public trust and a creation of the Constitution and the law and must be seen to respond to public demands for transparency and openness.

“The Commission will continue to uphold the basic tenets of transparency, openness and inclusivity in the conduct of elections and the delivery of electoral services.

“The Commission is not a political party and will not be swayed by partisan political interests. “Section 72 of the Electoral Act 2022 provides that a sealed certificate of return at an election in the prescribed form shall be issued within 14 days to every candidate who has been returned by the Returning Officer in an election under the Act.

“The Supervising National Commissioner whose responsibility it is to present the certificate of Return is still in Osun waiting for the arrival of the certificate.

“The Commission made the Declaration and the Return and it is uncharitable to insinuate that the Commission does not want to issue the winner of the election with a Certificate of Return.

“There is no law in place that mandates the Commission to issue a certificate to any candidate within 48 hours. Those that influence public opinion, especially in the electoral process should try to arm themselves with basic knowledge of the law and the processes and procedures of the Commission.”