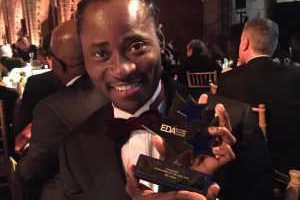 A top environmental scientist, Professors Omowunmi Amoke Sadiq and a poet/ literary critic, Professor Tanure Ojaide, have emerged as this year’s winners of the Nigerian National Order of Merit (NNOM).

Speaking last night at the dinner and investiture ceremony of the awardees, Vice President Yemi Osinbajo, said that the award recipients demonstrated that Nigeria is blessed with tremendous talent and that the nation’swriters, poets and scientists in the country are world class.

Osinbajo commended the laureates for their intellectual accomplishments and asked them to remain mentors for the younger generations.

The Vice President said that the greatness of individual citizens is yet to correlate with that of the nation, saying that the difficulties facing the nation today are in part the result of an elite failure to accept the responsibility that privilege confers, and the responsibility of shaping the right values for the society.

“We must define clearly what is lofty, noble and deserving of honour and how these values can be sustained, preserved and enforced.”

Professor Osinbajo said that there is a burden that comes with privilege, and that is “to create the moral and philosophical premises for integrity in the public service, fidelity to the rule of law and the creation of meritocracy as a rule.”

The Vice President also urged the Nigerian elite to join in the building of a new society where merit would be placed above other primordial considerations.

According to him, placing quota before merit does not work, saying that he is yet to meet a Nigerian who needed medical surgery and insisted that only his ethnic stock should perform it.

He challenged the Nigerian elites and leaders to make sacrifices and commit to a country run on merit, integrity, hard work justice and patriotism.

“To build a new Nigeria, we need a new tribe of men and women of all ethnicities, of all faiths, committed to a country run on high values of merit, integrity, hard work, justice and love of country.

“A tribe of men and women who are prepared to make the sacrifices and resolve the constraints crucial to building a strong society; who are prepared to stick together, fight corruption side by side, insist on justice even when our friends and those of our tribes and faith are at the receiving end.

“A tribe consisting of professionals, businessmen, politicians, religious leaders and all of those who believe that this new Nigeria is possible. This requires a new way of thinking, a new leadership corps, a new tribe.

“And the evidence we have seen today is that this country can truly be great and so may I just challenge us today that it is time to populate that new tribe.”

Other top government dignitaries at the event included the Secretary to the Government of the Federation, Engineer Babachir David Lawal, whose office oversees the planning of the  NNOM and the Governing Board Chairman of the Merit Award Prof. Moses Essien.

Responding after her investiture, Professor Sadiq thanked the Federal Government for the award and gave the assurance that it would spur her to greater contributions toward national growth and humanity. She noted the fact that the Buhari administration had focused attention on things that matter to the people and have sent serious message to the rest of the world.

On his part, Professor Ojaide commended the organizers of the award for the recognition, adding that the award was the most important in his life coming from his country.

Commenting on the Niger Delta crisis, Ojaide appealed for fairness from both the sides of the Niger Delta people as well as the federal government, in order to resolve the issues in the region.

“I want Niger Delta people to realize that they are part of the Nigerian federation and as such should cede some of the resources to the development of the entire country. But the rest of the country should also be sensitive to your own problems.” [myad]