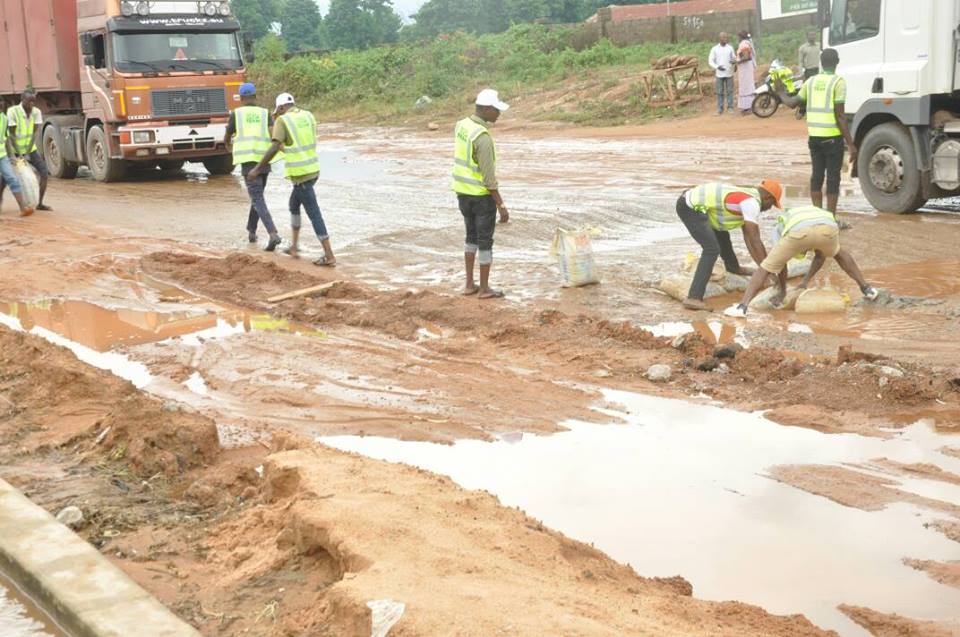 Members of a group under the aegis of the Esan Liberation Movement (ELM)  are protesting the unmotorable nature of the Benin-Ekpoma-Auchi road in Edo State and asked
the Federal Government to as a matter of urgency fix the road.
In a statement yesterday, August 26 by the Leader of Esan Liberation Movement, Prosper Iyere, on behalf of the Concerned Ekpoma Eminent Stakeholders Forum, (CEESF), Iruekpen Youth Association respectively, the Group called on the federal lawmakers representing the entire Esanland to prevail on relevant government authorities to direct the contractor handling the road construction to mobilize to site and immediately commence work on the project, to address the pains and terrible experience the people face on a daily basis.
The group and other concerned youths in Esanland, which have been protesting the neglect of the road since August 22, said that despite a series of letters to authorities drawing attention to the deplorable condition of the road, they were yet to get any response.
“It is no longer news that the terrible condition of the road has a terrible impact on the overall socio-economic life of the people, including but not limited to the destruction of their businesses, particularly of those who deal with perishable foodstuffs, who get stranded on a daily basis when their vehicles break down on the road. The result of this sad experience has always been huge losses of revenues, loss of lives, waste of time on the highway, and risk to lives and properties.”
The Group said that the consequences of the failure on the path of government to fix the road has also led to the use of alternative routes inside Ekpoma town which they said have now become unbearable for the people.
“As part of the South-South region that contributes majorly to the sustenance of the Nigerian economy through revenue from oil and gas, we dare to say that we deserve to enjoy the proceeds that come from the region and demanding for a good road network is not asking for too much.”
The Group decried the negligent, conduct and nonchalant attitude of lawmakers representing the region, saying that they have refused to exercise oversight function on the road as well as other facilities in Esan land, particularly the Benin/Auchi highway.
“Equally, we are concerned with the insensitivity of our representatives in the National Assembly to the plight of the people, in terms of attracting amenities to our area.”
As part of its protest, group said that the Ewu axis of the highway will be sealed off from public use until “our demands for immediate action on the road rehabilitation are met.”
It however assured the Police and other law enforcement agencies of their resolve to be peaceful and law-abiding during the protest, adding that they will not allow any hoodlum or group of persons hijack the protests  thereby tarnishing “our image by whatever means.”
The Group also pledged to support the contractors, Dantata and Sawoe, to effectively handle the construction.