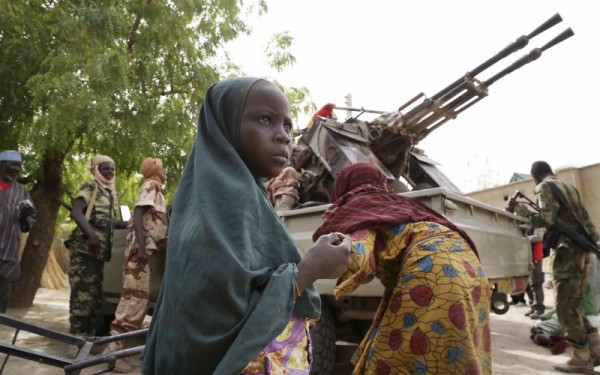 It was about 8:30 am on a humid Monday in Damask, Borno State, and driver Bukkar Hassan was getting set for the day’s business when he heard loud gunshots from the east.
He stepped out of his house to find out what had triggered the shots, only to find heavily armed Boko Haram militants exchanging fire with soldiers from the Nigerian Army.
“The shooting was heavy, and as people heard the gunshots they began to run in different directions,” Bukkar said. “Some ran towards the river, others to neighboring villages.”
As the militants advanced, Bukkar took to his heels, running towards home—but when he arrived there, he found something shocking: His house was on fire and his sisters were struggling with insurgents who were hell-bent on taking them away.
“They set our house on fire and walked through the streets, kidnapping children who were under 15 years of age and killing those who were above that age,” Bukkar recalls of the attack.
The insurgents managed to kidnap his two sisters. Other family members fled into the bush.
For hours, Bukkar walked south with his brother, without food or water, with nothing but the clothes on their backs. All their belongings were destroyed during the attack.
With a bit of luck, they were able to locate a relative in Maiduguri whose house they both currently live in.
“I still can’t stop thinking about my family. Only God knows their whereabouts and how they are faring,” Bukkar said.
Bukkar’s two sisters are among over 400 women and children kidnapped by Boko Haram militants in Damask. The town was liberated this month by troops from Niger and Chad.
Boko Haram is infamous for its kidnappings. The sect caused international outrage in April 2014 after it abducted more than 200 girls from a boarding school in Chibok town in Borno state. Since then, the group has abducted women and children from many other towns and villages in northeastern Nigeria, Yusuf Mohammed, a Maiduguri resident and childcare expert, said women, especially the young ones, are usually married off to Boko Haram militants, while children are used as soldiers because they come cheap.
“The very young girls are married off, mostly to militants while the boys are made to become spies, soldiers and potters,” said Mohammed.
”Unlike adults, child soldiers don’t demand wages. They don’t negotiate with the enemy or take bribes, neither do they form factions nor take up arms against you. ”
Though a regional force made up of troops from Cameroon, Chad and Niger has recently been helping Nigeria take on Boko Haram insurgents, the Nigerian government has attracted scathing criticism after it failed to stop the jihadists, who had carried out bombings of towns, schools and company installations, killing over 20,000 people and displacing nearly two million others.
The government has not explained how it failed to protect the lives over 20 schoolboys who were murdered in their sleep by Boko Haram in Buni Yadi, Yobe state.
Similarly, there has been no explanation for the failure to rescue the abducted Chibok schoolgirls nearly a year after they were kidnapped.
With elections imminent, the government appears to be racing against time to prove it has the capacity to deal with the intractable insecurity situation that has plagued the northeast, in order to get Nigerians to vote it back to power.
But Boko Haram’s presence still looms large.
Nearly two week ago, the group pledged allegiance to the Islamic State (ISIS) operating in Iraq and Syria.
This seems to have introduced a new dimension to the anti-insurgency campaign.
Although the military say it is not fazed by this, many Nigerians are expressing concern.
“What worries me is the fact that many young people are reading and asking questions about ISIS,” said Agafi Kunduli, a social worker based in Nigeria’s capital, Abuja. “I could easily have concluded that they’re doing this just for their education. But with the increasing number of foreigners pitching tent with the organization, I’m beginning to get skeptical.”
As Nigerians go to the polls on Saturday to elect a president, eyes will not just be focused on the ballot, but also on Boko Haram who have sworn to disrupt the process. The Damasak abductions may just be a reminder from the sect of their long held intentions.
Philip Obaji Jr. is the founder of 1 GAME, an advocacy and campaigning organization that fights for the right to education for disadvantaged children in Nigeria, especially in northeastern Nigeria, where Boko Haram forbids western education.