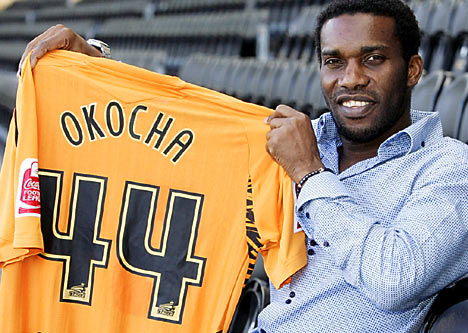 Former Super Eagles captain, Austin Jay Jay Okocha has auctioned one of his designed jerseys as he launched a foundation, known as Jay-Jay Okocha Foundation that is aimed at providing a platform for young, talented, but less privileged Nigerian youths to realize their dreams in life through football.

The jersey was bought for N260,000 by the President of Certified Institute of Auctioneer, Nigeria, Mr. Adeleke Hassan.

Okocha who played football to the highest level said that his foundation has entered into an agreement with an online auctioning firm, I-Naira.com to auction his memorabilia, covering the nearly three decades of his illustrious career.

Speaking during the unveiling of the foundation at the I-Naira.com centre in Ikoyi, Lagos, the former Bolton Wanderers play-maker said, “I have been looking forward to this day, to create a platform to give back to the society what football has given me.

“It is a wonderful initiative which I urge Nigerians to support me. It is beyond football because we want to use this platform and bring about lasting unity among Nigerians because I can use my voice to unite this country,” Okocha, who was flanked by his elder brother, Emma Okocha and the chief executive officer of I-Naira.com, Hilary Nwaokor said.

Nwaokor assured that, “from August 1, we will start auctioning his memorabilia and those of his colleagues to raise funds for the foundation.”