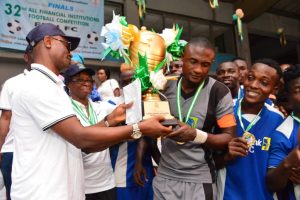 The finals of the competition was played at the Ilorin Township Stadium, Kwara State yesterday, Saturday, October.  The goal scored in the 67th minute of the game by number 14 jersey for First Bank, Gafaru Lasisi was all that made the difference in a pulsating encounter between both teams.

Speaking at the event, which was graced by the former Head Coach of the Super Eagles, Stephen Keshi, the CBN Governor, Godwin Emefiele, commended the teams that participated in the competition, and stressed that the tournament was one of the Bank’s foremost and oldest Corporate Social Responsibility (CSR) functions.

Emefiele, who was represented by the CBN Director of Human Resources Department, Ms. Chizoba Mojekwu, reiterated the bank’s commitment to make positive contributions towards the promotion and development of football in the country.

He lauded the increase in the number of financial institutions that registered in this year’s competition, even as he asked other institutions which are yet to register their presence in the competition to encourage their teams to register for the next year’s edition.

The CBN Governor thanked the Kwara State Government for making the stadium available, and the Nigeria Football Federation (NFF) for mobilizing financial institutions and ensuring a hitch-free competition.

He acknowledged the contribution of the media and all the football fans for their excellent conduct during the competition.

The final match was preceded by the third place play-off between the Securities and Exchange Commission (SEC) FC, and the Ikeja Microfinance Bank FC, which ended  3-1 in favour of SEC via penalty shoot-out after the match ended goalless at regulation time.

In attendance at the finals were representatives of Kwara State Government,  officials of NFF, ex-Internationals, Abdulwahab Shola Akinwale and Wasiu Ipaye; the Branch Controller and staff of Ilorin Branch; CBN executives and staff; Sports lovers; students from various schools in Ilorin; and the musical troupe of the Kwara State Government, which added colour to the event.