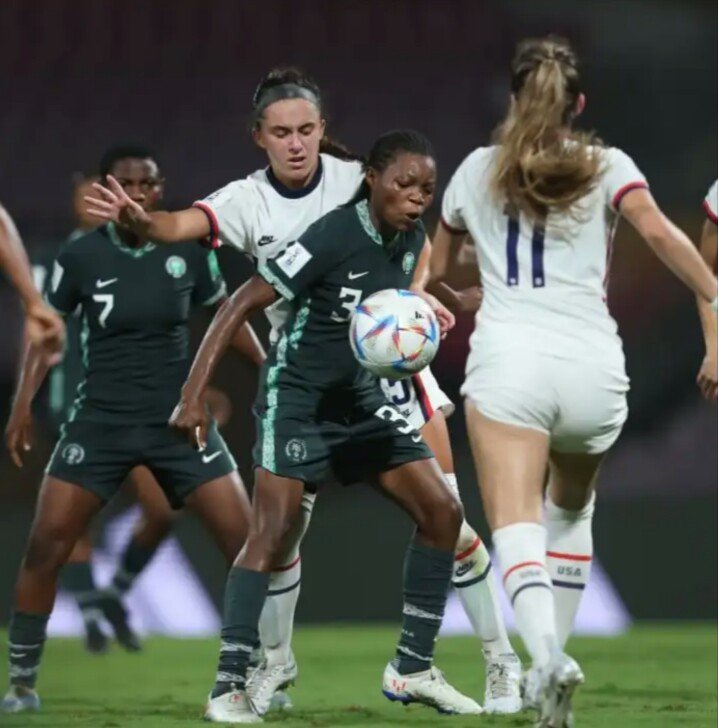 Nigeria’s Flamingos sent its American counterpart out of the 2022 FIFA U-17 Women’s World Cup competition with a 4-3 win yesterday, October 21.
The saving grace was the Nigeria goalkeeper, Faith Omilana, who overstretched herself to save shots at the penalty shootouts, after the two teams ended one goal at peace at full time.
This was the first time the Flamingos has made it to the last four in the history of the competition.
The quarter-final encounter at the DY Patil Stadium in Navi Mumbai was delayed due to adverse weather.
The game ended in a 1-1 draw after 90 minutes with Omilana making a number of crucial saves to keep the Flamingos in the mix.
The 16-year-old goalkeeper also saved two penalties to help the Flamingos beat the Americans.
USA pinned back the Flamingos early in the game , but it was the Nigerian girls that scored the curtain raiser.
Amina Bello was fouled inside the box by an American on 25 minutes and the centre referee rightly pointed to the spot.
Edafe Omamuso sent the goalkeeper the wrong way to hand the Flamingos the lead.
Amalia Villarreal equalised for USA five minutes before the break.
Both teams could not be separated after 90 minutes and penalty was needed to determine the winner.
In the end, the Flamingos converted four, while the Americans only scored three of their spot kicks.
Source: Promptnews