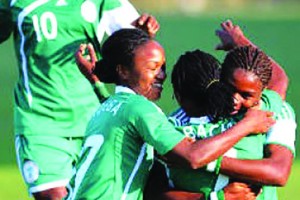 An 86th minute goal from Desire Oparanozie today, Saturday in Yaounde, for the Super Falcons against their Cameroonian counterparts, was enough to return the 10th Edition of African Women’s Cup of Nation, (AWCON) for the eighth time to Nigeria.

The Champions played their hearts out against the Indomitable Lionesses of Cameroon at the Ahmadou Ahidjo Omnisports Stadium in Yaoundé, which is a forty thousand capacity stadium.

Meanwhile, President Muhammadu Buhari has congratulated the Super Falcons on their victory, describing the hard-earned victory over the Indomitable Lionesses as “very sweet and well-deserved.”

The President commended the Nigerian women for their “indomitable spirit, resilience and team work” which spurred them to victory in spite of a vociferous home crowd.

He said that the Nigerian team achieved “this feat of being African champions for the 8th time,” a development he says has lifted the spirits of sports-loving Nigerians.

He called on other Nigerian sports men and women to emulate the exemplary attitude of the Super Falcons who placed the interest of the nation above personal interests, while assuring that the Federal Government will not relent in doing its best to promote sports within available resources.

The President also salutes the technical competence of the coaching crew, which enabled the Nigerian players to overcome their hard-fighting opponents throughout the competition. [myad]